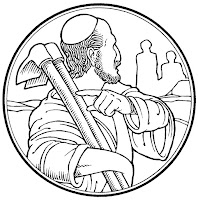 "‘Friend, I am doing you no wrong; did you not agree with me for a denarius?  Take what is yours and go your way, but I wish to give to this last man the same as to you.  Is it not lawful for me to do what I wish with what is my own?  Or is your eye envious because I am generous?'
"Thus the last shall be first, and the first last."

The parable in our Gospel lesson is one of the most difficult lessons to hear in the entire Bible.  It flies in the face of our nature and our own reason.  Even when we are the ones receiving the good part of the deal, it tends to stick in our craw.  You have heard and perhaps read of those who are visited with sudden good fortune, great wealth or huge success.  They many times have trouble handling it.  They question.  "Why me?"  They fear that since it was so quickly gained, it will also disappear just as quickly – and sometimes they are right.

But let it be on the other side of the equation, and we observe someone else, equally undeserving as ourselves – or more so – and the vagaries of what seems to us to be "chance" becomes incomprehensible and aggravating.  Just as it did those workers who were hired first, in the parable so long ago, this sort of thing smacks of injustice and unfairness, and creates in our minds an attitude of deprivation and a victim mentality which can be crippling.  Here is where the lesson behind the parable of the laborers serves and teaches us to live in the circumstances we find ourselves in.  Our text is the parable, and our theme is, God's Choice.

The parable paints a pretty clear picture.  The employer goes to the labor pool and hires his help, negotiating the standard compensation contract before actually sending them to work.  He happened to be a landowner and the location of the labor pool of the first century in Israel was the marketplace, where those who needed work would go and stand and wait for the wealthier neighbors to come and hire men for whatever chores they needed done.  In this case, there was a great deal of work to be done in the vineyard.

Anyhow, the day passes, and as it passes the employer continues to check out the labor available at the labor pool, and finding additional workers, he hires them on the spot.  There seems to be a need for a lot of workers – or the employer is simply a nice guy who wants to see everyone working.  He doesn't come to a contract agreement with these later hires, as he had the first ones hired, he merely promises to pay them "whatever is right".  I imagine that they were just glad to get a job when they showed up so late.

If you want to make much out this story, you can preach about each time of hiring and who that might be and how there is always a need for more workers in the vineyards of God.  You can do that, and some preachers do, but a parable doesn't necessarily apply in every detail, but only at the "tertium", the point of comparison.

Finally, the day is done and everyone lines up to get paid.  It was like a modern temp-job, you got paid every day.  The employer tells the paymaster to pay those hired last, first.   Already we see the final proverb of the story proving to be true: The last are first, and the first are last to be paid.

When those hired just an hour before quitting time come to the paymaster, they each receive a full day's wages - exactly the same as the first ones hired agreed to.  This was done in front of everyone else, so those hired first saw it and simply assumed that their wages were going to be proportional to those hired last.  When they came to receive their pay, they got exactly the same as those who had just started, a denarius – which was a normal day's pay.  As you might expect, it rankled.  They figured that their entire day's work in the heat of the day, and such, worth more than the short time of the ones who had worked just an hour or so.  Working from the hours worked to the paycheck, their cause seemed reasonable.

But it was not.  They had contracted with the landowner - they had agreed to a specific sum for their day - the typical day's pay.  They allowed themselves to get distracted by what others got, and under which apparent circumstances, and cried - "This isn't fair!"  The landowner reminded them of their contract, and pointed out that he was not being unfair with them, but generous with the others.  They had received what they had bargained for.

Jesus asked two pointed questions, "Is it not lawful for me to do what I wish with what is my own?" and "Is your eye envious because I am generous?"  The answer to both questions is usually "yes."

This parable was aimed at the Jews.  They had been the Chosen People for centuries, even millennia.  They had come to believe that they deserved something for all that time and whatever it had demanded of them.  Jesus was telling them that others were going to come into the Church, into the number of the Chosen People, and that they would receive possibly the same as the Jews who had long been faithful.  It further made the point that the Jews did not deserve anything for their time, except what the original contract - the Old Covenant - had stipulated.  They were receiving precisely what they had bargained for.  The Jews were going to think it was unfair, and they were going to envy the Gentiles who came in, and they were going to think that they ought to be in charge by virtue of seniority.  And all of that happened.

Jews originally taught that Christianity was just a twisted form of Judaism.  Some still think that way.  They cry out against what they call "supecessionism", the idea that Christianity is what Judaism was supposed to become with the coming of the Messiah.   The Judaizers of the Apostolic era were Jews who tried to seize control and shape the church and her doctrine according to their traditions and desires - which means holding the Law first and foremost, and making the Gospel a different thing, a thing you had to merit.  If they had succeeded, Christianity would probably have faded away millennia ago.

The one thing that was going to gripe them was the freedom of the Gospel.  God forgiving was okay, but only after a certain "earning" of it.  Cutting the connection between my works and my salvation is something most Christians and most denominations still find objectionable - but it is the Gospel.  Gentiles were welcome in Israel, but only as a second-class citizen.  The "proselytes at the gate", as they were called, were never permitted to enter the court of men, or the holy place.  They were let in to the gate, and had a second-tier kind of standing in Israel.

Well, Christianity undid all of that.  The Jews were a minority very quickly, and they were not allowed to impose their own religious peccadillos or the ancient laws on the Gentiles.  Very quickly, the Gentiles were dominant, and not just in numbers, but in authority.  As soon as the Jewish authorities understood that Christianity was not a sect of Judaism, they began to outlaw it and persecute it, and bar Christians from the Temple and Synagogues, and declare as ‘dead' those who would convert.  That was their "grumbling."

But it was also the plan of God.  The Christian Church was God's choice not the choice of the Jews.

This would be a nice history lesson, if that was all that the parable meant.  It also applies to us, however.  We have been Christians, most of us, for a long time – perhaps all of our lives.  We have been decent people in a worldly sense and we have gone to church more or less faithfully.  In that way, we have been working all the day long in the vineyard.  Now and again, we have a problem with those who join us late in the game.  People who come from lives of carefree sin and indulgence that often appeals to us.  They have had the things we gave up, and we miss those things.  Such people are, alternately, not "our kind" of people.  We have a sense that they don't belong here.  Sometimes.

On the other side, when new people come in, or the young (not a great problem here, of late), we are often willing to take their money and welcome them to sit in the pews, but we don't want them challenging us or taking over some things.  We want the decisions, they can have the work.  Again, this is not much of a problem here, yet.  We scarcely have enough bodies for the work.

What Jesus is telling us is that it is all God's Choice.  We should not be looking from one man to the next and trying to see if we have our fair share of God's goodness, or be worried about who does more or who does less.  It is good to be concerned that each of us is present for Word and Sacrament, because, then we are like the landowner - going out all day long searching for those who still need what He has to give.  We want the best for each other, and for those who have not yet heard and believed.  The important part is that each of us, and those who are called by God to be part of us, are here, and hearing, and receiving.  Our status or our reward is not the issue.

That has already been decided, and it is abundant.  Our sins are forgiven even before we are fully conscious of them.  We have been justified, made right with God, and given a new and eternal life.  We don't need the pleasures, or the riches, or the honors others may receive.  We
may admire them, and even desire them, but we do not need them.  We will have what God deems right for us.  But we already have the day's wages guaranteed because God has chosen to be generous with us in Jesus Christ and bring us each to eternal life in glory with Him.

Our salvation, our church, our place in the over-all scheme of things is God's choice.  After all, He redeemed us, bought us out of sin and death.  Now He owns us.  And doesn't He have the right to do what He wishes with what is His own??  He has chosen each of us, in grace, and called each of us by our name, in Baptism, and personally fed us with His holy food in the Holy Supper.  We can give up competition, and work together, and rejoice in the good things of God promised to us.

Remember, every single one of us stands in the place of the guys hired at the eleventh hour, in the parable of Jesus.  We are each receiving what we did not earn and do not deserve, just because God is generous.  We stand at the paymaster's desk, and receive the full day's pay - eternal life and salvation -not by our beauty or goodness or charms, but because God is generous, or, as the Church is wont to say, gracious.  It is all about God's choice.