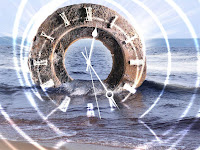 He says so.  The evidence for the existence of God is the existence of the natural world.  The mind that says, “I do not see any evidence of God”, is a remarkably incurious thing.  Such an attitude requires that one take the existence of all things as a neutral condition.  Given the state of human knowledge about the nature of reality, that is not a reasonable position.

Once upon a time, man could look at the world as big lumps of “stuff” that had always, in his experience, been there.  In those simple, bygone days, most people took it for granted that there was a deity behind it all, somewhere.  Today, with physics speaking of sub-atomic particles, describing the atomic structure of matter with some confidence, and wrestling with the nature of the forces of all of those things, to suggest that this all “just happened” is risible.

Before the age of genetics, life was a challenge to explain, absent a deity.  The greater the sum of human knowledge and understanding about the structure of living things, and how they function, the clearer it becomes that such elegance and efficiency in the structure and function of life-forms of all descriptions, and their interdependency, cannot be explained by careless and casual reference to some vague metaphysical statement about evolution.  If ever there was a religion built on shaky evidence, flying in the face of both common sense and serious thought, it is atheism.


As the equation is stated in the Bible, “every house is built by someone, but the builder of all things is God.”  When one encounters a wristwatch on the beach, no one ever assumes they have stumbled upon a unique natural phenomenon.  The appearance alone suggests manufacture and artifice – the word behind “artificial”.  It is instantly clear that someone has lost their watch.  Similarly, when one comes across an automobile in the woods, even such as has a tree growing up through the floorboards and the roof, one can tell that someone drove that car there at some previous time.  No one mistakes it for a natural formation.

However, when one looks at the intricacies of a living cell, just one of the millions in a plant or an animal, science would have us believe that it just sort of fell together with some sort of inevitability provided by time.   The information stored in a unique and efficient, self-replicating library called DNA, is imagined to have arisen from random happenings.  Information Theory, a relatively new field of study in the last century, has concluded that information cannot arise from random processes.  But the information stored in the simplest cells is huge!  One scientist speculated that there are more bits of information in the simplest living cell that there are letters in all of the books in the world’s largest library combined!

The processes of life as we know it require an oxidizing environment.  The process of forming the chemical components of life, however, require a reducing atmosphere.  In order for life processes to continue, they say, the chemicals of life must be transferred from one environment to another quickly – and the living molecules must be sufficiently complex to protect themselves from ruinous oxidization and able to replicate themselves in order to proceed to develop into more complex life.  With no intelligence and no force directing the process the chemicals would have no way of knowing either of those things, and no method of transport from one environment to another.

Then we come to the incredible complexity of the living cell, and chemical operations which must occur within the cell in order for life to continue.  Looking at an apple as a thing, and a solitary unit, one might be able to imagine that such a process could somehow develop by chance.  Looking at the variety of cells within the apple, and examining the many processes that must occur, and produce a variety of effects, depending on the cell, leaves one with the feeling of having stumbled across a very complex and expensive wristwatch on the beach, and being asked to accept that it pulled itself together into its present form all by itself, through random chemical processes with random resources available.  Either than, or matter has an innate directionality to it that requires it to organize itself into living things, which the dust-bunnies under my bed do not appear to possess.

The structure of matter, being composed of energy bound into some form somehow, and then being further organized into atoms, molecules, elements, planets, and such, cries out for an organizing principle.  Piled on top is life, which comes in an amazing variety and mind-boggling complexity, which cries out for a creator of some sort.  God.  The next question would be who is God?, or which deity is God?, or do we know the deity who is responsible?  But until men can humble themselves enough to acknowledge the painfully evident – that there is a god, and that this deity created, or guided the processes of creation, we are hardly ready to honestly ask and discuss the questions about God’s identity.

When you get there, He has weighed in and we are ready to talk.
Posted by Cuda at 2:05 PM No comments: