I was walking my dog the other day when it struck me that the dog is a good illustration for man''s sinful nature. 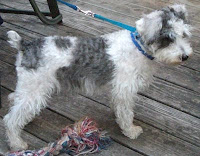 My dog always wants to go outside of the permitted area. If he is on a leash, he is pulling it to the end and straining to go just a little father. If he is walking free around the yard, he is always wanting to go outside of the yard. It doesn't matter how large or small the yard is, he wants to be just a little father out than I want him to go. He is well trained to voice commands, but he is always testing the limits.

If I call him, he will ignore me as if he is deaf until I get close enough to grab him, or he will comply for a moment, and, when he thinks I am not paying attention, he will head right off in the direction I just called him from. I know that he is not deaf -- he can hear me open a bag of dog-treats (or animal crackers - his favorite!) from three rooms away! But if I call him for something he would rather not do, like a bath or a haircut, he feigns deafness almost perfectly.

He likes to dawdle to sniff and what-not for no apparent reason. If I am in a hurry, this dawdling is more important than otherwise. The dog is just contrary at times.

I asked him (yeah, like the animal can understand everything I say) why he always wants to go where I have made clear he is not supposed to go, and it struck me that all of his behaviors are like those of any person facing the law of God. We want to go where we are told not to go. We always want to test the limits. If nothing is permitted, we push to get away with something. If nothing seems to be forbidden, we go to outrageous lengths to find some way to offend or transgress. And we humans seem to be almost perfectly deaf to the Word of God, until we get into trouble, or we want something from Him very badly.

Seeing his behavior as an object lesson on human sin and contrariness has made it no easier to put with, it just makes me laugh at myself, and thank God that He is more patient and forgiving than I am often minded to be. In some ways, the situation reminds me of that poem, To a Louse, by Robert Burns - "O wad some Power the giftie gie us To see oursels as ithers see us! "

Sometimes I think that is why God gave me a dog.