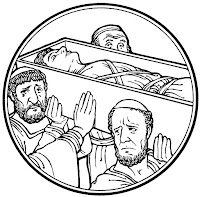 And it came about soon afterwards, that He went to a city called Na'in; and His disciples were going along with Him, accompanied by a large multitude.  Now as He approached the gate of the city, behold, a dead man was being carried out, the only son of his mother, and she was a widow; and a sizeable crowd from the city was with her.  And when the Lord saw her, He felt compassion for her, and said to her, "Do not weep."  And He came up and touched the coffin; and the bearers came to a halt. And He said, "Young man, I say to you, arise!"  And the dead man sat up, and began to speak. And Jesus gave him back to his mother.  And fear gripped them all, and they began glorifying God, saying, "A great prophet has arisen among us!" and, "God has visited His people!"  And this report concerning Him went out all over Judea, and in all the surrounding district.

Jesus, the Rabbi under the unfriendly observation of the Scribes and the Pharisees, disregards the customs and traditions - yes, even the law - and walks up and touches a dead body - or at least the bier upon which it is being borne, thereby defiling Himself and risking scorn and condemnation.

Jesus, the miracle worker, speaks to the dead man and commands Him to sit up.  There is drama upon drama in this short Gospel lesson.

If this were a radio melodrama, this is the point at which the announcer would say, "Tune in tomorrow for the thrilling conclusion to our story."

But it isn't a radio drama, it is history, an account of Jesus coming upon the procession of grievously sad funeral.  The drama is real.

Death confronts life, and life, death, and life come out the victor!

Jesus touches the funeral bier and instead of being defiled by the touch of death, the whole thing is cleansed by His touch and His Word and life takes possession of the funeral, and joy simply drives away the sorrow.

Jesus commands the dead to get up, and the young man springs to life, and rises from the bier, and speaks - and Jesus presents Him alive again, to His suddenly frightened and delighted mother.

And everyone starts babbling about God and His work among his people and about the healing and resurrection of this one young man.

And it all happened because Jesus felt compassion for the grieving mother.  And that is our theme, Jesus Felt Compassion.

The story itself is amazing, and you could get lost in the details, and forget the over-arching message.  Here was a woman who had already lost her husband.  Her son was her only support.  Now, suddenly, he is gone as well.  I know that it is suddenly, because they buried their dead on the same day they died, in Israel, unless they died quite late in the day – and then they would be buried on the next morning.  This woman was devastated.  He only child was dead.  The true depth of her sorrow, and the troubles that it was bringing to her could be measured in the crowd of mourners - "a sizeable crowd was with her", according to Luke.

Now, I am informed that in that culture you were obligated to join the funeral procession, if you were aware of it.  It was an affront to the Creator for anyone to ignore it, and pretend that it did not touch them - because death will finally touch everyone, and death is part of life, and we ought always to recognize and honor life, even - perhaps especially - when it has been extinguished.

Jesus is approaching Na'in from Capernaum with a large crowd following Him.  This miracle was no small, private affair.  It was well witnessed and well-attested to.  When Jesus surveys the scene, he felt compassion.  I am sure that the meeting appeared to be pure chance - and I am certain that God timed all things that this meeting would happen just as it did.  And it happened not just to show us the power of Jesus, or that He could do it, but to show us the compassion of Jesus.

He could have ignored it - or joined in with the crowd to wail and mourn at the visitation of death and all the attendant sorrows and troubles it brings.  After all, death was nothing unusual even back then.  In fact, death was more common, and less postpone-able then than it is now.  And when somebody died, they were taken home and cleaned up and wrapped up and buried that same day - there was no mortuary and no dressing the body up and putting on make-up so that the dead appeared merely to be sleeping.  But Jesus did not ignore it, this time.  He did not play along.  Perhaps it reminded Him of His own coming death, and His mother's approaching sorrow.  Whatever the cause at the moment, Jesus felt compassion.

So He healed the man, that is, He raised him from death and caused him to be alive again, and gave him back to his mother, to the joy and wonder and fear of everyone there.  Life conquered death.  Jesus spoke to the dead man as if he were merely asleep, and the man heard Him and awakened from death itself.  Of course, he had to die again, one day, but that is another story for another day, and it is one that the Bible does not take time to tell us.  What is striking - aside from raising the dead, of course, is the compassion of Jesus.   Although it happened - this raising the dead thing happened only occasionally in the ministry of Jesus, He has that same compassion towards us all.

"He died for all", the Bible tells us, and "God so loved the world" - not just certain persons in it - "that He gave His only-begotten Son, that whosoever believeth in Him should not perish but have everlasting life."  That was His compassion.  He saw our need in sin and He healed us, raising us from the dead, so to speak, since we would have died eternal death in hell without Him.  But, through His Word, He has called us to life eternal and made us heirs of glory with Him.

Our Gospel lesson this morning doesn't just say Jesus has the power to raise us from the grave - although it does make that point powerfully - it says the Jesus has compassion.  It teaches us about the caring of our Lord - something we often forget to think about because life has rough edges and sharp corners and we have to deal with pain, and tragedy, and terrorism, and hurricanes, and what all.  But God would, by the words of our Gospel lesson, show us the compassion which moves Him, so that, in the words of our Epistle Lesson today, "so that Christ may dwell in your hearts through faith; and that you, being rooted and grounded in love, may be able to comprehend with all the saints what is the breadth and length and height and depth, and to know the love of Christ which surpasses knowledge, that you may be filled up to all the fullness of God."

The Greek word in our Gospel for "felt compassion" means "moved in his guts" or "felt it in his viscera".   It means that it is not some abstract, academic notion, but the same sort of compassion you feel when you turn on the news and watch children wading through a flood, or see a pile of lumber in some town somewhere and realize that before the tornado or whatever that it was a store, or someone's home.  Jesus knows how we feel.  He understands the hurts and the fears.  He doesn't fear the way we do, never did, because He was never without hope - and He had the certainty of the good will of God for us, and for Himself.  But He knows - and He understands fear and pain from a very personal standpoint.  He can feel it right along with us - that is what compassion means; to feel along with.

In all of our troubles, He is there.  He knows our pain and He is watching over us.  He takes no pleasure in our pains and suffering - which is why He died for us, to spare us the greatest suffering of all.  Remember, He was under no obligation to stop and care for the pains of this widow woman.  Surely there were thousands of other opportunities to do just the same in the lives of others, where He did not.  But for this one Jesus felt compassion, and He acted to assuage her pain and meet her needs.

We know that we stand in a special relationship with Him, by virtue of our Baptism, and His choosing of us to be His children.  That choice comes with certain troubles connected to it, guaranteed.  But it also comes with His compassion guaranteed.  Those troubles come because the world hates Christ, and we show the world Christ shining through us in His Word and in His worship and in His working through us.  In these troubles, we have the promise of God that He is with us every step of the way to strengthen us and that we shall not have to bear more than we are able to endure.

He also gives us His Word and the fellowship of the saints, and the powerful gift of the Holy Supper to help us and strengthen us and encourage us.  When we partake of the Holy Supper, we receive Christ's true body and blood, and with that forgiveness and strengthening and His presence in us and with us to make us equal to the work which He gives us to do, and the cross which He calls us to carry in His name.

That doesn't mean that pain will not hurt, or that we will not be genuinely challenged by the cross which we must bear.  It would not be a cross if it did not bring pain and hardship.  But Jesus feels compassion.  He will not give us more than we can endure - and everything we must endure is stamped with His purpose.  We may not see the purpose, or the increase that results from our cross and our work.  We are never promised that we will understand it all, or finally see how what we did and what we endured worked out His holy will.  We are only promised that God causes all things to work together for good to those who love God, to those who are called according to His purpose.  Our work is faithfulness.  What we do and how it accomplishes the will of God is His work.

But in the hour of trouble, or pain, or sorrow, we can find great comfort in knowing that Jesus feels compassion for us just as He felt compassion for that woman in her sorrow and deep need, so long ago.  He acted, miraculously, to help her and comfort her – and He will act on our behalf and for our comfort and blessing as well.  He has acted, in redeeming us, and He continues to act through Word and Sacrament for our comfort and strengthening.  And He will act in our lives and in our needs - by means of our brothers and sisters in the faith, and by means we may not imagine, and many not recognize as His acting until much later.

But be of good cheer.  In every situation, we may trust that our God knows and is working our good and blessing - we see an example of it in our Gospel, where Jesus felt compassion.

In the Name of the Father, and of the Son, and of the Holy Ghost.
(Let the people say Amen)
Posted by Cuda at 11:00 AM