Do Not Be Amazed! 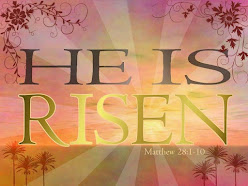 And when the Sabbath was over, Mary Magdalene, and Mary the mother of James, and Salome, bought spices, that they might come and anoint Him.  And very early on the first day of the week, they came to the tomb when the sun had risen.  And they were saying to one another, ‘Who will roll away the stone for us from the entrance of the tomb?"  And looking up, they saw that the stone had been rolled away, although it was extremely large.  And entering the tomb, they saw a young man sitting at the right, wearing a white robe; and they were amazed.  And he said to them, "Do not be amazed; you are looking for Jesus the Nazarene, who has been crucified.  He has risen; He is not here; behold, here is the place where they laid Him.  But go, tell His disciples and Peter, ‘He is going before you into Galilee; there you will see Him, just as He said lo you.'"  And they went out and fled from the tomb, for trembling and astonishment had gripped them; and they said nothing to anyone, for they were afraid.

Do Not Be Amazed!

He is Risen! He is risen indeed! Hallelujah!

How exciting that first Easter must have been!  And yet the women were filled with fear -- so much fear that they did not tell anyone what they saw, at least not right away.  They did not do as the angel told them.  They were confused - such a quick trip from the deep grief to the excitement of the resurrection.  And they saw the angel, and they were amazed!

Amazement is always the response of humanity when it sees God at work!  But the angel told them not to be amazed - not that this was not God at work among us, but that this is what Jesus came for, and this is what Jesus promised would happen, and this is what we ought to have expected.  But we did not, and they did not.
It seems a little silly telling twenty-first century Christians not to be amazed on Easter.  I mean, who is?  We have seen this day come and go for years - and our families, often, for centuries.  What is there to amaze us?

That is a good question, and one that we will answer this morning.  It should amaze us that all of this Gospel stuff is true.  God is not like mankind always pictures Him, when they depart from the book.  He is not a God who demands human sacrifice.  He is not the sort of God that wants to make man miserable.  He is not a God of caprice, like the ancient Gods of the Romans and the Greeks, who came to earth with human lusts and human weaknesses and overweening pride.  Nor is He distant from us and disinterested in us.

These are the evil things man imagines about God, depending on whether his experience of life is good at the moment or pain-filled and frustrating.  We should stand in utter amazement at God, He is loving.  He is just.  He has granted us nearly perfect autonomy of action, even though we are totally dependent on Him and His blessings.  He is intimately involved in our lives.  And He balances all of these seemingly contradictory attributes while blessing us and protecting us.

We abused our autonomy in order to reject Him who is life and well-being.  We sinned.  We need to understand that we have no way to comprehend the depth of the offense of sin against His holiness, and we sinned by direct rebellion and rejection of Him even though we need and depend upon Him daily. That rejection is called sin, and it is evident in our gossip, in our easy and unprovoked angers, in our lies, and in our wickedness toward one another, all of which should have brought us immediate and eternal death.  We had spurned and rejected Him who gives us life and all things.

But God loves us.  We should be amazed at that, all by itself.  He loves us not only so much, but in such a way that He found the way to punish our sins with death and so maintain His perfect justice, and yet still preserve and save us.  That is what Jesus accomplished.  In point of fact, God did require human sacrifice, because He had declared that the soul that sins shall die.  And, to accomplish both His justice, and our salvation, God laid upon Jesus the sins of us all, and put Him to death in our place.

On Easter morning, the one we celebrate today, and every Sunday, Jesus rose from the dead.  His rising was God the Father s declaration for all who would see it that Jesus was the perfect substitute, and that the payment was accepted, and that our sins were forgiven, and that God was freely bestowing the gift of salvation and eternal life on all who would take Him at His Word, believe what He proclaimed about Jesus and promised in connection with Him and His life and His death and His resurrection, and trust Him.

We should be amazed at the love of God.  What a price He paid to redeem us from our own sin and rebellion!  What a marvelous and incontrovertible sign of His love He has given to us. What glorious evidence of forgiveness and life everlasting He has provided in the resurrection.

We should be amazed that it is true!  Who has ever seen a resurrection? Ordinarily, the dead stay dead!  But the message of the resurrection of Jesus is that they will not stay dead forever.  These all will rise body and soul, just as Jesus did.  We, too, shall rise!  Jesus rose - all the scoffing of the skeptics aside.  Jesus rose, teeth, hair, bones and all!  He rose to show us what rising from the dead will be like, and to demonstrate the truth of the promises.

We shall rise one day, body and soul reunited.  We shall be whole and well and alive for eternity, on that day.  We shall be ourselves and recognizably so.  Christians often celebrate Easter in a cemetery because the cemetery looks to be our final and utter defeat, and yet it shall be the field of our victory in Jesus Christ on that last day.

The world has long denied that Jesus rose.  The Jews said the body was stolen, just as the Bible says they did.  Unbelievers inside the church and outside of her have said that it never happened.  But we have the eyewitness reports.  We have the testimony of hundreds, encapsulated here on the pages of Scripture.  We have the reluctant testimony of the Jews - the grave was empty and they did not have the body! We should be amazed that it is true!

We should be amazed that we can look at the details of the most exciting story in human history and not cry aloud with joy and praise to God for all that He has worked for us!  Or perhaps we should be ashamed that we can look at such wonderful gifts and promises, so clearly witnessed and proven, and yet we are often not brought to shouting our joy and triumph!  Our sins are paid for and forgiven – taken away, and nailed forever to the cross in the body of Jesus.  We have evidence of eternal life beyond death.  We have the promise of God that we too shall rise.  We should be amazed, and thrilled, and shouting for joy, He is risen!

Do not be amazed, the angel said.  What he meant was, You should have known.  You should have expected this.  He told you Himself.  Those words apply to us too.  We should not be surprised.  We should, however, be delighted and rejoice this morning.  Jesus Christ has risen from the dead, first-fruits of those who believe.  We too shall rise!

Let us rejoice this Easter morning!  He is Risen!  He is risen Indeed!!  Hallelujah!

In the Name of the Father, and of the Son, and of the Holy Ghost.
(Let the people say Amen)
Posted by Cuda at 9:54 AM