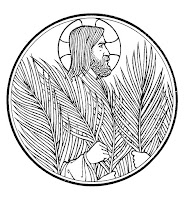 And when they had approached Jerusalem and had come to Bethphage,
to the Mount of Olives, then Jesus sent two disciples, saying to them, "Go into
the village opposite you, and immediately you will find a donkey tied there and
a colt with her; untie them, and bring them to Me.  And if anyone says
something to you, you shall say,  The Lord has need of them,' and immediately
he will send them."  Now this took place that what was spoken through the
prophet might be fulfilled, saying, "SAY TO THE DAUGHTER OF ZION,
BEHOLD YOUR KING IS COMING TO YOU, GENTLE, AND MOUNTED ON A
DONKEY, EVEN ON A COLT, THE FOAL OF A BEAST OF BURDEN.'"

And the disciples went and did just as Jesus had directed them, and
brought the donkey and the colt, and laid on them their garments, on which He
sat.  And most of the multitude spread their garments in the road, and others
were cutting branches from the trees, and spreading them in the road. And the
multitudes going before Him, and those who followed after were crying out,
saying, "Hosanna to the Son of David; Blessed Is He Who Comes in the Name of
the Lord; Hosanna in the highest!"

We have all heard of Palm Sunday.  Most of us have heard it preached
about time and time again.  The modern church has designated it "the Sunday
of the Passion," because many churches have stopped observing Good Friday
with a worship service, and in many of those that do, most of the members stay
away.

Generally, we know the story.  What we often miss is why the story is
significant.  We do pageantry and wave palm leaves and, when there is a large
Sunday School, we think it is cute to have the children's parade during the
service, usually during the first hymn.  What we want to consider this morning
is that what makes Palm Sunday significant and the Palm Sunday ride
important is really what happens after the parade.  So our theme this morning
is, After the Parade.

Of course, we want to refresh ourselves on the details of the Palm
Sunday ride.  It happened during the holy season.  Palm Sunday occurred just
before the Passover.  They didn't call it Palm Sunday then, of course, that is the
Christian designation for the day.  It simply happened at the beginning of the
week which would, that year, conclude with the Passover.  Crowds were
descending on Jerusalem for this holiest of all holidays in the Jewish church.
Passover was the day of salvation.  They celebrated God's rescue from the
bondage of slavery in Egypt.   They commemorated by word and deed   and by
the holy Passover Seder   the miraculous deeds of God.  In the Passover, God
sent the Angel of Death to strike down the firstborn of Egypt   and He caused
the Angel of Death to pass over the Children of Israel who trusted in the
promise of God and marked their doors with the blood of the lamb, and shared
the bread of haste and the bitter herbs and the meat of the lamb itself for the
first time.

For the Jews in those days, the Passover was Maundy Thursday and
Good Friday and Easter all rolled up into one   except that they had lost the
sense of wonder at it all and had lost any awareness of the spiritual dimension
of it, and they and let it become a day of obligation rather than the day of utter
joy that it was intended to be.  But observing it filled Jerusalem, and so the
crowds who had come to the holy city to join in the ancient celebration were
gathered.

And they were primed by the modern sense   modern for those days   of
the nearness of the Messiah, and the longing for freedom from foreign
domination, and a religious fervor which cried out not so much in hope as in
desperation.  They were looking for the Messiah, even though they did not often
understand what the Messiah was really about.  They pictured another political
rescue by another purely earthly leader.  They imagined Israel would rise as a
political power and crush her enemies and every lust of the flesh would be
granted to Israel to demonstrate their favored relationship with the Almighty.

And strange things were happening in their day.  There seemed to be an
awful lot of demonic signs and possessions.  Then there were new preachers
and prophets   first John, now Jesus   and there were other prophets and
Messianic pretenders about whom history tells us, even if they are only hinted
at in the Bible.  The time was right, the crowds were gathered, the religious
atmosphere was primed, and Jesus got up on that donkey and rode into
Jerusalem like a king of ancient Israel on a coronation ride   and suddenly
everything came together, just as God planned, to form the coronation ride of
Jesus.

The leaders of the Temple complained.  Jesus told them that it couldn't
be helped.  If the crowds were silenced, the very stones along the path would
have to cry out.  This was not a natural event, but God's work.  He arranged
the coronation ride of the King, the Messiah whom no one would recognize and
no one would claim, but who was true King and Savior nonetheless.  The cry
was the coronation cry of Israel, Hosanna to the Son of David!  Blessed is He
who comes in the name of the Lord!

Although the crowd cried it out in glee and in religious fervor, seemingly
without understanding the true meaning of the words, they really said a great
deal.  "Hosanna"   "Hoshia - ah - na" means "Grant salvation now!" or simply
"save us now!"  And that is what Jesus had come to do, more fully than they
could have anticipated, more completely than they had desired.  They called
Him "the son of David."  They understood that the title was a royal title.  They
were calling Him the rightful King of Israel, a title for which He would be
crucified in less than an week.  But they probably overlooked the Messianic
meaning of the words.  They were probably not thinking about the Old
Testament promises of the one who would be called "Immanuel", who would
take on their sins and die in their place.  But those things are the things that
happened after the parade.

They didn't think about the Suffering Servant, come to be Messiah,
Savior, and King, but that is who He was   and is.  And this parade was the
coronation ride of Jesus.  It was not of earthly, political value.  It was not valid
in the eyes of the governments of the time.  But it was of eternal and heavenly
significance.  For a moment in time, God's people heralded God's Anointed
Messiah and proclaimed Him King of Israel and Savior of the World.  They
threw their cloaks in His path and formed a spontaneous parade to welcome
Him into the holy city.  After the parade, He would ascend His throne.

But it would not be a throne of gold and cushions and comfort and
power, it would be a throne of pain and suffering and sorrow and death.  It
would the throne of the cross.  And His crown would be a crown of thorns
pressed brutally into His scalp.  His royal robes would be torn from Him and
offered as the prize in a game of chance, and His scepter would be a sprig of
hyssop with a sponge soaked in soured wine mixed with a common pain-killer
from which He would not even permit Himself to drink.  His royal court would
be mockers and mourners and two convicted felons, and He would be firmly
fastened hand and foot to His throne of agony with large nails.

This series of events actually began in Bethlehem, and would not be
finished until the King ascended His throne and conquered all His enemies, as
all the prophets and so many of the Psalms predicted.  And the last enemy to
be utterly defeated, the Bible tells us, is death.  His resurrection showed us His
victory over sin and death and Satan.  And the good news for us is that He
wants to share His victory with us.  He has conquered death.  He has redeemed
us from sin.  He had paid the penalty and borne the wrath of God in our place.
His resurrection is the evidence that it is complete and sufficient.

But now Jesus has risen from the dead.  It happened after the parade.
Now it is our turn to pick up the palm branches and cry aloud the coronation
praise of our King.  He approaches His throne in our lessons once again.  We
will celebrate again the events of that holy week so long ago that worked our
salvation.  Your sins and mine paid for and forgiven.  The promises are for us
as well   forgiveness and resurrection from our graves and life everlasting in
glory with Jesus.  He that believes and is baptized shall be saved!

And to think, the best part happened after the parade!