What Does This Mean? 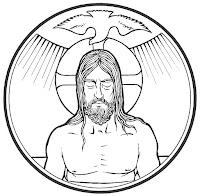 Then Jesus arrived  from Galilee at the
Jordan coming to John, to be baptized by him.  But John tried to prevent Him, saying, "I have need to be baptized by You, and do You come to me?"  But Jesus answering said to him, "Permit it at this time; for in this way it is fitting for us to fulfill all righteousness."  Then he permitted Him.
And after being baptized, Jesus went up immediately from the water; and behold, the heavens were opened, and he saw the Spirit of God descending as a dove, and coming upon Him, and behold, a voice out of the heavens, saying, "This is My beloved Son, in whom I am well-pleased."

What Does This Mean?

It is the most Lutheran of questions.  We grow up with it in the Catechism.  "What does this mean?"  It doesn't always mean that we don't know what something means, when we ask the question.  It is simply the Socratic method of teaching – asking questions.  We see the method at use in the Christian Questions and Answers in our Catechism, building the understanding by means of questions that direct one to think clearly about an issue.  It is also the nature of a Catechism to ask questions and then to answer them.

But this morning, it is not a Catechism question, nor is it intended to be the Socratic method of inductive learning.  It is simply a question aimed at getting into the meaning of a very familiar account.  We all know about Jesus' Baptism.  It is the Gospel for the first Sunday after Epiphany, this year, focusing on the Baptism of Jesus.  What we want to do is think about what it teaches us, and learn the lessons it presents at the start of this New Year.  Our theme is, What Does This Mean?

John was preaching repentance and was baptizing those who confessed their sins with a baptism of forgiveness.  He did it at the Jordan River - because there was plenty of water there, which is where all our Baptist friends get the idea that Baptism is supposed to be by immersion.  They picture John baptizing in waist-deep water, dunking people under to symbolize their new birth and washing clean from sin.  And it is a wonderful symbol.

It just doesn't happen to be what John was doing, in all likelihood.  These were people who believed that the water – bodies of water – was the domain of demons.  They did not know how to swim - not even fishermen, generally.  They were terrified of water, particularly deep water.  That is why the parting of the Sea and the parting of the Jordan by Joshua was so significant.  It demonstrated God's power over the devil's domain.  That is what the "walking on water" of Jesus mean to those who saw it.  He was treading on the domain of the devil.  It wasn't simply mastery of the surface tension of water, or some ability to float on the soles of His feet.  It was that demons were supposed to live in the water.  That was a common superstition of the time.  Jesus was demonstrating His mastery over the demonic kingdom by walking above it - on it, not allowing those devils to grab Him and drag Him under and slay Him as they seemed to have done to so many for so long!

So these people were not likely to want to walk out into deep water and be plunged under.  It would have suggested precisely the opposite to them from the symbol we imagine today.  Instead of representing a cleansing and new birth, it would have pictured being plunged into the domain of Satan.

My grandmother on my mother's side was from Kansas.  She could be an illustration.  She grew up in a dry land, without lots of lakes.  She was terrified of water in lakes and rivers.  Knee-deep was as good as she could get.  I am sure not every person in ancient Israel was terrified of water, but I would guess that most of those who gathered to hear John were.

So John was standing in the shallows, pouring water over their heads in a ritual washing – as most of their washing were – to picture for them the forgiveness which God was working through their repentance and Baptism at the hands of John.  He was washing their sins away.  His Baptism was very much like ours.  And Jesus came to be baptized.

John took one look at Jesus, and He knew who He was.  I don't know if John recognized his cousin, or not.  Probably did.  But John was filled with the Holy Spirit, as the great prophetic forerunner of the Messiah, and he saw, and he knew instantly, that this One was the Son of God, the Savior, and without sin.  So John said, "I have need to be baptized by You, and do You come to me?"  What does this mean?

It means that John understood who Jesus was, and asked Jesus to Baptize Him instead.  And, let's face it, Jesus did not need forgiveness.

Then Jesus replied, "Permit it at this time; for in this way it is fitting for us to fulfill all righteousness."  Scholars have been debating the meaning of those words ever since.  Jesus asked John to baptize Him, even though Jesus did not need forgiveness.  He did not argue with John about His assessment.  He simply asked John to let it be, and do the baptism.  He said it was "fitting for [them] to fulfill all righteousness."  What does this mean?

It means that it was the right thing to do.  Jesus was righteous already, no sin.  So what He did was not for forgiveness, but for us.  In part, this was Jesus taking over for John.  He received from John what John was doing.  He didn't need to, in any absolute sense, but it was important for people to see that Jesus was "coming after" John.  He was John's successor – the one John was preparing the way for.

He also recapitulated the history of Israel with His life, and, just as Israel had passed through the waters – which Scriptures call a "baptism" into Moses – so, Jesus passed through the waters – and then went into the wilderness for 40 days, instead of the 40 years.  He is the better Israel, for He did all things well, and did not sin, and did not fail to be and to do all that God called Him to be and to do.

It was fitting, for God wanted Him to do it.  It connects Jesus to the Old Testament people walking with Moses, and it connects Him with us, Baptized as He was, and cleansed by Him as we are.

Then Jesus came up out of the water – He walked to shore and stepped out of the river – and the heavens opened, and the Holy Spirit descended on Him in the form of a dove, and the voice of the heavenly Father spoke, saying, "This is My beloved Son, in whom I am well-pleased."  It is interesting to note that God's Word sounds different to different people, sometimes.  Mark and Luke report Jesus' hearing of the words, "Thou art My beloved Son, . . ."  John, and anyone else who may heard and understood the words, heard "This is My beloved Son, . . ."  God's Word comes to us, always fitting us as we hear it.  We dare never assume that the Word we hear is aimed at anyone but us!

What does this mean?

First we see the Trinity.  Jesus is standing in the water, the Holy Spirit is perched on His shoulder - or head - in visible form of a dove, and the Father is speaking out of the sky.  All three persons may be observed, if not seen.  Father in heaven, Son on earth by the river-bank, and Holy Spirit descending upon and resting on Jesus.

Secondly, we hear that Jesus is "well-pleasing" to the Father, as He begins His public ministry.  This is the judgment of God that Jesus is holy and without sin.  He is fit to begin the great work of our salvation.  We will hear the same judgment of God spoken from the mount of Transfiguration on January 24th, as Jesus sets His face to descend into Jerusalem to die for us.  This is God the Father acknowledging His Son, and declaring that He is fit and holy and righteous as He begins His great work of His public ministry!

I want to take this opportunity to focus your minds on the song of the Angels to the Shepherds outside of Bethlehem.  "Peace on earth, good will to men" is better translated "Peace on earth among men with whom He is well-pleased."  This "Well-pleased" spoken over Jesus here, at the beginning, is what is accounted our own in connection with Jesus Christ, by grace through faith.  These words here mean He is ready to be our Savior, and He has what we need, as He begins.  Right here, right at the beginning of His public work, Jesus has what we need from Him to have peace with God and to end the wrath of God against our sins.

Why is this our post-Epiphany Gospel?  Because it speaks of revealing Jesus.  Jesus is revealed beginning His great work prepared, equipped, and worthy.

Are you ready to step forward in faith?  Are you prepared with faith, equipped with the gifts of the holy Spirit, and worthy by virtue of repentance and forgiveness, and confidence in God?  Yes.  This sermon is just a reminder that You begin again this week with God, Jesus is your constant companion – He said, "Behold I am always with you."  The Holy Spirit has been poured out on you in your baptism.  He has been given to you as a pledge and a guarantee of God's presence, power, and blessings – and your salvation, too.  You share, by the grace of God, in the "in whom I am well-pleased" spoken about Jesus on the day our Gospel records.

What does this mean?

It means we may live in faith, with hope and trust in God, confident of His mercy, blessing and presence with us and among us!  Our sins are forgiven, and we are beloved of God in Jesus Christ.  That's what it means!

In the Name of the Father, and of the Son, and of the Holy Ghost.
(Let the people say Amen)
Posted by Cuda at 3:10 PM