Matthew 17:1-9
And six days later Jesus took with Him Peter and James and John his brother, and brought  them up to a high mountain by themselves.  And He was transfigured before them; and His face shone like the sun, and His garments became as white as light.  And behold, Moses and Elijah appeared to them, talking with Him.  And Peter answered and said to Jesus, “Lord, it is good for us to be here; if You wish, I will make three tabernacles here, one for You, and one for Moses, and one for Elijah.”  While he was still speaking, behold, a bright cloud overshadowed them; and behold, a voice out of the cloud, saying, “This is My beloved Son, with whom I am well-pleased; listen to Him!”  And when the disciples heard this, they fell on their faces and were much afraid.  And Jesus came to them and touched them and said, “Arise, and do not be afraid.”
And lifting up their eyes, they saw no one, except Jesus Himself alone.  And as they were coming down from the mountain, Jesus commanded them, saying, “Tell the vision to no one until the Son of Man has risen from the dead.” 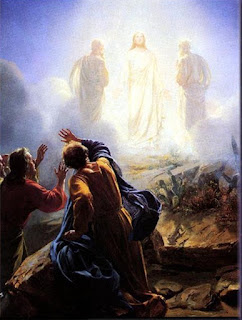 Crossroads.  Have you ever come to that point in your life?  To crossroads?  That is the point you come to when you have reached one goal and you're about to start on another, or when one crisis is past and you are ready to face everyday life one more.  There are a lot of different kinds of crossroads at different times of life, and we all come to them, now and again.  When you come to crossroads, you tend to stop for a moment and look around, to look forward to what lies ahead, and to look back at what has come and gone before.  Then, usually, we take a big breath and square our shoulders, and set off on another leg of the journey through life.

Our Church-Year is at the crossroads this morning.  We have scaled the giddy heights of Advent and looked out from the inspiring peaks of Christmas joy, and then we descended on the pleasant slopes of Epiphany.  Now we stand at the crossroads, looking down the road into the gloomy abyss of Lent, leading into the death valley of the Church calendar.  We call this crossroads Transfiguration Sunday.

In Matthew’s gospel, Jesus has just heard the disciples confess Him as the Messiah, the Son of God.  Then He foretold how He was to die.  But His disciples were not ready to hear it.  Peter tried to persuade Jesus not to endure the cross, actually saying God forbid that this should happen to you!

Jesus was preparing for the road to Jerusalem. It was in this context of preparation that He took three disciples up on the mountain with Him.  He took three because by Jewish Law it took three eyewitnesses to establish testimony as fact.
Jesus took Peter, and James, and John.  Luke tells us that they went up the mountain to pray.   Although Jesus knew what they were going to see, they did not.  While they were praying, the disciples began to nod off.  Jesus kept praying, but they were beginning to sleep, just at that point where they were semi-aware of their surroundings, and halfway to slumberland, Suddenly, Jesus was transformed!  His physical body began to change.  He began to show the glory that was His as the Son of God.  What that did to His body we do not know, all that the disciples recorded for us was that He began to glow and shine with the glory – shining brighter than the sun – His clothes became brighter than bright and whiter than white.

Just as suddenly, the disciples were wide awake, and amazed and terrified and bewildered all at once.  They stared at the transfigured Jesus, and suddenly they noticed two others standing there with Him.  From the conversation they were having with Jesus – or just from how they looked – the disciples knew that these other two were Moses and Elijah – and they, too, had glorified bodies!  And the disciples heard them calmly discussing with Jesus the death He was about to die.  There could be no doubt about it, not even for Peter, Jesus was heading for a death on the cross.  This was about all the disciples could handle.

But suddenly there was more.  A cloud of light overshadowed them – a bright cloud – as though it shined instead of casting a shadow, but our language simply doesn't have a word for cloud-shine.  The cloud glowed with an eerie and unearthly light.  It seemed like it filled the whole sky above them.  And then the voice of God boomed out of that cloud.  This is my beloved Son, in Him I am well-pleased.   Listen to Him!
Much the same words had been spoken from the heavens at the Baptism of Jesus.  The “well-pleased” was the same as the good will and good pleasure of God about which the angels sang at Bethlehem those many years before.

This was, however, too much to deal with for the three disciples.  Our text tells us that they curled up on the ground and hid their heads in fear.  Peter had begun to speak incoherently, not even really thinking about what he was saying, or so Luke tells us, but the voice of the heavenly Father stopped even that, and they all hid their heads in stark terror.

Then Jesus touched each one of them, reassuring them, and when they lifted their heads, there was only Jesus, plain, old, ordinary Jesus, just as they had always seen him.  No cloud shining, no face shining, no clothing glowing, no Moses and Elijah, just Jesus, Himself, alone.

Now, what did they see?  What was the view from their mountaintop crossroads?
Looking back, they saw Mount Sinai.  They saw Moses and the Law.  They saw Moses coming down off the mountain with a face shining with an unearthly light in the reflected glory of God.  They saw the man who had been entrusted with the Law and the covenant.  They saw a dark and ominous cloud hanging over Mt.  Sinai, terrifying the people with its flashes of fire and the awful, fearful rumblings.

The cloud they saw was bright, not dark and ominous.  They did not hear the rumblings, but the clear voice of God, a voice which may have terrified them, but it spoke of good pleasure and blessings, not of fear and threatenings.  It is that well-pleased of which the voice spoke which is underlying our gospel.

Looking back, they saw Elijah, the great prophet.  They saw Him, but in Jesus they saw an even greater prophet, and the one who fulfilled all of the prophecies.  Elijah prophesied doom.  Jesus prophesied forgiveness and grace.  Elijah prophesied the coming Messiah, the Suffering Servant.  Jesus was that Servant, and He not only prophesied, He fulfilled all that He promised by the word of the Lord.  Something greater than Elijah was on that mountain.

And what did they see looking forward?

Looking forward, they saw the death of Jesus Christ.  They heard the great giver of the Law and the great prophet of old speaking about the death which Jesus had to die.  There was no longer any room for denials.  They finally understood, only briefly perhaps, and not with utter clarity, but they finally understood that Jesus had to pass through death to enter glory.  And because of that death, we have only to pass through death to enter that glory also.

Although it is hard to say for sure what they understood, they saw the sacrifice.  God was declaring that Jesus, with whom He was well-pleased when He had begun His course at His baptism, was still well-pleasing to the Father.  God announced on that hill that He was well-pleased with the One who would die for us.  Hearing the voice then terrified them, but looking back in later years, it was the assurance of fitness of the sacrifice, and validation of all that they had heard and read in Holy Scriptures before.

Because Jesus was well-pleasing to the Father, He could die on the cross for the sins of many.  His righteousness was perfect, so His death was unneeded, and He could exchange with us, His holiness for our sins, His life for our death.  He died for our sins, not any of His own.  He was made sin for us, the Bible says, [He] who knew no sin, that we might be made the righteousness of God in Him.  And so it is!

Because while we were yet sinners, Christ died for the ungodly, we can now “put on” the righteousness of Christ, which He freely traded to take up our sins.  We can have forgiveness.  How?

By faith.  When we believe that Christ has paid the full price for us, and when we take God at His Word that, for the sake of Jesus Christ, God forgives us and gives us eternal life, we are forgiven – and we possess that eternal life, and we will walk in glory with Him one day.

When we look from the crossroads of the mount of the Transfiguration, we see our forgiveness – the worthy sacrifice, the willing exchange, the free gift.  We see who it really was that died for us, and how He can be so bold as to say, Your sins are forgiven – go and sin no more!  He revealed Himself in that shining moment of glory.
And Jesus showed us what we could look forward to.  We see the resurrection and the reality of the eternal life which we have been promised in the two who stood and spoke with the Lord.  Just as the Bible says, when we see Him we shall be like Him, for we shall see Him as He is.  There they were, Moses and Elijah.  Long dead, and yet they were there, alive and recognizable!  We, too, shall have bodies, and we shall be who we are - except without sin.  We shall have bodies of glory, like Jesus and Moses and Elijah.  We shall see and commune and converse with our Lord and with one another.

And we can see that the portal to transfiguring glory is what we dread and fear and call “death.” But death is swallowed up in victory, Christ's victory.  Moses and Elijah spoke of the necessity of death for Jesus, and if we are to follow Him, it must be through that same portal.  This truth alone should teach us not to fear death, but to view it as the door to eternal life with Jesus – and it should comfort us that those who have passed through those gates before us are not dead and gone, but live in transfigured glory, like Jesus, and with their Lord.

While we may not be able to commune with Jesus in that holy place today, as Moses and Elijah, or to see the wonderful transfiguration with our own eyes, as did Peter and James and John, we can share with them in the communion with Christ at this holy table, and here receive the blessings which He has won for us – life and forgiveness.  And having paused at the crossroads, and having refreshed ourselves with this holy Meal of the body and blood of Jesus, we are ready to continue.
We take a deep breath, and we begin our descent through Septuagesima and Sexagesima and Quinquagesima into Lent.  We begin to live again – walking on the path which He has given us to walk. Let us thank God, and with Peter, humbly confess, ‘Lord, it is good for us to be here!’