The Look of Faith and of Unbelief 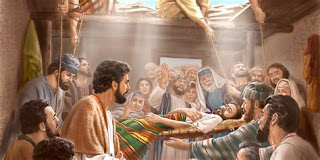 And getting into a boat, He crossed over, and came to His own city.  And behold, they were bringing to Him a paralytic, lying on a bed; and Jesus seeing their faith said to the paralytic, "Take courage, My son, your sins are forgiven."  And behold, some of the scribes said to themselves, "This fellow blasphemes."

And Jesus knowing their thoughts said, "Why are you thinking evil in your hearts?  For which is easier, to say, ‘Your sins are forgiven,' or to say, ‘Rise, and walk'?  But in order that you may know that the Son of Man has authority on earth to forgive sins" – then He said to the paralytic – "Rise, take up your bed, and go home."  And he rose, and went home.  But when the multitudes saw this, they were filled with awe, and glorified God, who had given such authority to men.

The Look of Faith and of Unbelief

Our Gospel, this morning, is one of my favorite Gospel lessons.  Jesus demonstrates His power to heal, and His authority to forgive sins, and He puts His adversaries in a quandary, and He does it all with such style and simplicity.  It is a marvelous text, and I love to preach it, and I have preached it often.

This morning, I want to focus on one specific element of the account.  These men carry their paralyzed friend to Jesus.  Mark and Luke also tell of this moment, and they tell us the other details - about how crowded it was around Jesus, and how the men climbed to the roof of the house that Jesus was in, and how they tore up the roof tiles and lowered their friend into the room near Jesus.  Matthew did not tell us these details, but they help us understand what the text says, that Jesus saw their faith.  That is our focus this morning, the look of faith - and of unbelief.

It is an exciting account!  Jesus has begun to draw crowds wherever He goes.  He is home in Capernaum, where He lived during His adult life.  Once people found out, Jesus was swamped.  The crowds around Him were so thick that these friends of the paralytic could not shoulder their way into the presence of Jesus.  So, being creative, and convinced that Jesus could heal their friend, they climbed to the roof of the house and lifted the roofing material out of the way.  It wasn't like one of our roofs, all nailed down and weather-proof, but it took some work - and they had to fix what they tore up later, but the Bible doesn't go into that detail.

Anyhow, they lower their friend into the room.  He was undoubtedly lying on a stretcher-type thing.  It made for easy transport, and it made for easy lowering into the room.  Just a rope at each corner, and they could lower him safely, as though it were an elevator of sorts.  Jesus saw how desperate they were to bring this man to Him, and how hard they worked to do it.  He could look into their hearts, too, and see what drove them to such extremes, but it was clear that they just knew that Jesus could heal their friend, so they came on.

Jesus' response tells us that He saw that they believed that He was the Messiah, the Savior promised for so long.  I can tell that by Jesus' first words, "Take courage, My son, your sins are forgiven."  Why would Jesus speak these words of comfort and encouragement, except that He saw that they would be met with faith?
His bold pronouncement was met with immediate anger by the Scribes.  They didn't say anything out loud, but they were thinking, perhaps even muttering to themselves, that Jesus was blaspheming.  They judged Him so because it was a fundamental article of their faith that only God could forgive sins.  By saying, "Your sins are forgiven", Jesus was declaring that He was God, or equal to God, which to the Jews of Jesus' time was the same thing.

Jesus could see that, too.  The text says "Knowing their thoughts" Jesus said, "Which is easier, to say ‘Your sins are forgiven,' or to say ‘Rise, and walk'?"  The difficult part of the question was that only God can do either thing.  Of course, it would be easier to say, "Your sins are forgiven".  No one could see if it was true.  That was the basis of the charge of blasphemy.  Who could tell?

On the other hand, "Rise, and walk" required that the paralytic be healed, made whole, and be able to get up and walk away.  I would guess that this paralyzed man was known in the community, perhaps well-known.  They knew that he could not simply get up and walk.  So, the answer was obvious, but no one could have spoken the answer out loud without also being charged with blasphemy!  But Jesus doesn't wait for any answer.  He never tempts people to think or speak evil.  He made His point with the question, and then He proved His authority.  He said to the Scribes, "‘But in order that you may know that the Son of Man has authority on earth to forgive sins' – then He said to the paralytic – ‘Rise, take up your bed, and go home.'   And he rose, and went home."

The unbelief of the scribes was not so readily visible.  Jesus could see it, but many others might not have.  They were simply accepted as good and faithful church members.  They were leaders.  Some may have had their doubts about them, but there was no outward sign.  Evil doesn't always leave an outward sign.  It shows ultimately, but it can lie in wait for a time, and simply fester in the hearts and thoughts of evil men.  But evil is evil.

Their evil was simply unbelief.  They doubted that Jesus had the authority to do what He was doing.  They dismissed the power of the Word He spoke.  They accused Jesus of a terrible sin – and all of that falsely, because they could simply not accept Jesus for who He was, nor believe the truth that He spoke.

It is the same today.  Faith cannot help but work, doing things that reveal the specific things that the believers believe.  Do you believe that your sins are forgiven?  That faith will show in how you handle guilt, and how you deal with your sins when you come to see your behavior as sinful.  You don't hide it or deny it, not even to yourself.  You confess it, and repent, and believe the gracious words of forgiveness which Jesus speaks to you.

Do you believe that the will of God toward you is good?  Then the hard parts of life are not so spooky and confusing.  Yes, pain is still pain.  When it is your loved one that dies, it is still a tremendous sorrow.  But You know that God is working all things for good for those who love Him, for those whom He has called according to His own purposes - and those purposes are good.  They are life and salvation!  So, when sickness raises its head, you know that God is still with you and will hold you by the hand and sustain you.  It doesn't make the illness less, it simply means that it doesn't rob you of the comfort of knowing that everything will be all right, in God's good time and way.

Do you believe that God has the power to heal, repair, and put things right?  Can God guide the course of your life?  If you believe that, and you trust that His will toward you is good, then prayer is one action that shows your faith.  Faithfulness is another - because you know that what it looks like and what it is may be two different things!  God can make anything possible, and turn every situation into blessings.  He doesn't call on us to win every battle, or to feel good at the end.  That is how fairy-tales work.  This is real life, lived in the presence of God, who loves you enough to send His Son to die a gruesome death in your place, and who pays such close attention to you that He knows the number of hairs on your head at any given moment!

And so does unbelief.  It looks timid in the face of challenges.  It may roar with false bravado, but it cannot face the guilt of sin, so it pretends that good is evil and evil is good.  Unbelief cannot trust God to fix things, so it has to fix them, often by denying God and doing what is wrong, rather than counting on God to make it work out all right.  Unbelief does not expect God to have a good will toward itself, and so it rails against God and grumbles about blessings and difficulties alike.  It expects no good thing, and so it gets angry, just like the Scribes in our Gospel.  Unbelief expects no healing from God, and so it falls victim to despair.

And every one of us stumbles at one time or another into the behavior of unbelief.  We do not believe as we should, and our flesh works to overthrow the Spirit that God has given us.  When we discover that we have been less faithful and less believing that we know we can be, it is no good to pretend that it is not so.  We need to confess our weakness and our sin, and ask God to create that "clean heart" that we sing about so often in our services.  We need to humble ourselves, and acknowledge our sins, and ask for forgiveness.

"And when we confess our sins, God is faithful and righteous to forgive us our sins and cleanse us from all unrighteousness."  It is that simple, and it is that hard.  Have you sinned?  Then repent, and hear the word of forgiveness - Your sins are forgiven!  Those are the same words Jesus spoke to comfort the man who lay paralyzed before Him.  Your sins are forgiven.  But don't stop with my words, come and kneel at the altar, and ask God to give you His assurance.  He will, you know.  He will feed you with the very body He nailed to the cross in your place so long ago.  He will give you the blood that He shed for your sins, to drink.  He will fill you up with Himself, and cleanse you of your sins.  And when you eat His body and drink His blood you can have no illusion that maybe it was meant for the man or woman next to you, and that God did not intend to be gracious and forgiving to you.  He places His body in your mouth, and His pours His blood through your lips for you, so that you may know with utter certainty, and you may be confident that Jesus loves you!  Your sins are forgiven.

Then you may arise and go home, just like the man in the Gospel lesson.  You can walk, and walk in the way of faith, comforted by forgiveness, and living out your trust in God.  That is the look of faith.

In the Name of the Father, and of the Son, and of the Holy Ghost.
(Let the people say Amen)
Posted by Cuda at 8:06 AM