What Makes You Afraid -- and Why? 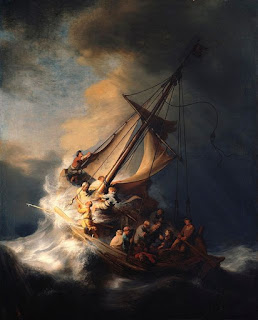 35 And on that day, when evening had come, He said to them, "Let us go over to the other side."  36 And leaving the multitude, they took Him along with them, just as He was, in the boat; and other boats were with Him.  37 And there arose a fierce gale of wind, and the waves were breaking over the boat so much that the boat was already filling up.  38 And He Himself was in the stern, asleep on the cushion; and they awoke Him and said to Him, "Teacher, do You not care that we are perishing?"  39 And being aroused, He rebuked the wind and said to the sea, "Hush, be still." And the wind died down and it became perfectly calm.  40 And He said to them, "Why are you afraid? How can you have no faith?"  41 And they became very much afraid and said to one another, "Who then is this, that even the wind and the sea obey Him?

What Makes You Afraid, and Why?

It is easy for us to see what frightened the disciples.  They were out in the middle of one of the world's most unpredictable bodies of water, in the middle of a great storm, their boat was being tossed about by waves bigger than it was, and they were filling with water faster than they could bail it out.  On top of that, they probably did not know how to swim.

Why do I think that they did not know how to swim?  Easy.  In their society and religion, they had the superstition that the bodies of water, particularly seas and large lakes, were the domain of the demons.  After all, they had reasoned, so often when someone fell into the water, they disappeared.  They were dragged under by the demons and died there.  If their bodies ever did float to shore, they were always dead.  It seemed reasonable to them that the demonic ones lurked in the waters, waiting for them to make the mistake of entering their realm.  So, one did not learn to swim, because one did not willingly enter the devil's domain and invite death.  They might jump into the shallows where they could walk.  They tried to swim when they were in deep water, but they didn't generally swim well, and most, except for the hardy fishermen, couldn't swim a lick.

They had good reason to be terrified.  Even if they were able to swim, swimming in a violent storm is not usually successful.  Their boat was about to sink, or so it seemed.  They were going to die.  And Jesus was asleep.  He was acting like nothing was wrong and they were perfectly safe.

They woke Jesus up.  They were asking Jesus if He didn't even care that they were about to die.  In Matthew's account, they just cried out to Him to save them because they were perishing.  I am not sure what they expected Jesus to do, but they called on Him to rescue them somehow.  They clearly did not expect Jesus to do what He did, for they were marveling at what He did.  And Jesus simply commanded the wind and the waves to settle down and be quiet, and it happened!

Jesus pointed out that inconsistency, and asked them why they were so cowardly, why they were so easily frightened – and then He answered the question in Matthew, – You men of little faith!  The question was an accusation, and the answer was the explanation.  As long as Jesus is on the job, we have no reason to be afraid of anything.  Period.  Not sin, not sickness, not death, not hell, not the wrath of God, not injury, not sorrow, not Covid, not misfortune, not financial disaster, not hunger or thirst or anything!  Nothing should have the power to make us afraid – if we believe the Gospel.

St.  Paul said it in Romans 8:  What then shall we say to these things? If God is for us, who can be against us?  He who did not spare His own Son, but delivered Him up for us all, how will He not also with Him freely give us all things? . . .  For I am convinced that neither death, nor life, nor angels, nor principalities, nor things present, nor things to come, nor powers, nor height, nor depth, nor any other created thing, shall be able to separate us from the love of God, which is in Christ Jesus our Lord.

Our confidence in God and our shield against fear rests in the Gospel.  It was on the cross and in His willingness to die for us that Jesus showed us how precious we are to God, how great His love is toward us, and how far He will go to save and rescue us.  He became a man for us.  He set aside the glory of God and took on the poverty of man, and lived among sinners and those who hated Him as God and Man for us!  He endured the abuse leading up to the cross, suffered the pain and the indignities of the crucifixion, and died for you!  It wasn't a faerie tale sort of thing.  Jesus died the same sort of death you will one day face, human death.  It was the separation of body and soul.  He died in your place so that your death would not be permanent or filled with terror and pain, but be the doorway to eternal life in glory with Him.  He went that far and did that much for you.  That is the Gospel.

That is what you confess with your anniversary celebration theme from Ephesians 1:3:  Blessed be the God and Father of our Lord Jesus Christ, who has blessed us with every spiritual blessing in the heavenly places in Christ

Knowing that love, and the will of God to do whatever it takes to bless us, and go as far as needed to save us, we should be at peace.  We can be confident that nothing will happen in our lives that will be evil for us, if we simply put our trust in Him, and rest our confidence in Him, and find our hope – in this world and life and for eternal life – completely in Him and His love and His good will for us.  And what is His good will for each and every single one of us?

At this point, I have trained my congregations for decades to reply, "Our Salvation."  So let us try this again: And what is God's good will for each and every single one of us?

We should be at peace in His love.  But our flesh does not always permit us that peace, does it?  And so our Gospel lesson today asks you the question, "What Makes You Afraid, and Why?"  Just like the Disciples, we can stand in the presence of Jesus and be frightened by the noise and the fury of the storm of life around us.  Many people fear the worst is going to happen.  The economy will collapse.  Their personal lives will disintegrate.  Their children will fail, or turn their love away from them.  Life will crush them in one way or another.  Among us, disease is often a specter that causes fear.  Cancer.  Heart troubles.  High-blood pressure.  Covid, Diabetes.  M.S.,  Strokes.  We often fear them, and they cause us terror when the doctor speaks their names in the diagnosis of our health.

What makes you afraid?  We each have something.  But the ultimate reason for fear is our little faith.  God would reassure you.  He would have you know no fear at all.  Cast all your cares upon Him for He cares for you!  Let God do the worrying!  Are not two sparrows sold for a penny? And yet not one of them will fall to the ground apart from your Father.  But the very hairs of your head are all numbered.  Therefore do not fear; you are of more value than many sparrows.  Remember the love that God has for you and all that He has suffered for you already!

The cause of fear is sin.  It convinces us that God is against us because we are evil.  And it is true that we are evil and sinful by nature, but God is not against us!  Sin causes us to fear death – but Jesus has borne our sins, and died our death to transform our deaths into the door leading directly into eternal life in the very presence of – and glory of – God.  Sure, life will hurt.  There will be pains and discomforts at times.  Some of them will be tremendous.  If anyone would come after me, he must deny himself, take up his cross, and follow me.  But the pain will pass, and the discomfort is but for a time, and then glory.  St.  Paul reminds us of this truth in His statement of faith in Romans 8:18, For I consider that the sufferings of this present time are not worthy to be compared with the glory that is to be revealed to us.

When we are with Jesus, nothing in this world can harm us.  It may not be fun at every moment, but then His cross wasn't fun either – so why should the cross we must take up be?  However we may perceive it, no evil shall befall us.  Not even death can hurt you when you have everlasting life, and resurrection hope built on Jesus Christ and His death and resurrection.  It is like a get out of jail free card in Monopoly – only this isn't a game.  It is for real.  He that believes and is Baptized shall be saved!

What makes you afraid?  God's answer is that it is the smallness of your faith.  Pray like the father of the boy who was demon-possessed when He was seeking a miracle from Jesus, Lord, I do believe, Help my unbelief!  This isn't a command but an invitation from God to find peace and security and hope in Him for every circumstance of life.  We are perfectly safe and secure in the arms of Jesus.  Remember the precious words from the pen of Paul, Who will bring a charge against God's elect?  God is the one who justifies; who is the one who condemns?  Christ Jesus is He who died, yes, rather who was raised, who is at the right hand of God, who also intercedes for us.  Who shall separate us from the love of Christ? Shall tribulation, or distress, or persecution, or famine, or nakedness, or peril, or sword?  Just as it is written, "FOR THY SAKE WE ARE BEING PUT TO DEATH ALL DAY LONG; WE WERE CONSIDERED AS SHEEP TO BE SLAUGHTERED."  But in all these things we overwhelmingly conquer through Him who loved us.

Heaven knows – and I mean that literally, heaven knows how many things there are threatening us and trying to make us afraid.  There is just one answer, and it is the perfect answer, the blood of Jesus Christ and the love of God and His promises to those whom He has claimed to be His own in baptism.  Let not your heart be troubled, neither let it be afraid, believe in God, believe also in Me.

What makes you afraid? – pray the answer be nothing.  And Why?  Because Jesus Christ is our Lord and our Savior.

In the Name of the Father, and of the Son, and of the Holy Ghost.
(Let the people say Amen)
Posted by Cuda at 9:31 AM