A Test of Faith 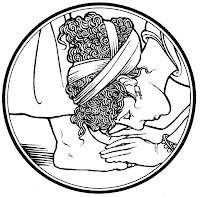 And Jesus went away from there, and withdrew into the district of Tyre and Sidon.  And behold, a Canaanite woman came out from that region, and began to cry out, saying, "Have mercy on me, O Lord, Son of David; my daughter is cruelly demon-possessed."  But He did not answer her a word.  And His disciples came to Him and kept asking Him, saying, "Send her away, for she is shouting out after us."

But He answered and said, "I was sent only to the lost sheep of the house of Israel."  But she came and began to bow down before Him, saying, "Lord, help me!"

And He answered and said, "It is not good to take the children's bread and throw it to the dogs."  But she said, "Yes, Lord; but even the dogs feed on the crumbs which fall from their masters' table."  Then Jesus answered and said to her, "O woman, your faith is great; be it done for you as you wish." And her daughter was healed at once.

A Test of Faith

Our Gospel, this morning, is a wonderful account of a woman in prayer, and, in the words of Jesus, expressing a profound faith.  It is sort of like situations that we find ourselves in at times.  Our situations are not always as extreme as this woman's, and our results are not always as much the way we desire them to be as this woman's results were, but she can serve us as a lesson, illustrating the way prayer works, and demonstrating how faith works as well.  This woman passed a test of faith.  And that is our theme, this morning; A Test of Faith.

The narrative is simple and clear.  Jesus is walking alone, minding His own business.  He is apparently trying to avoid just the sort of attention that this woman gives Him.  I say "apparently" because I suspect Jesus knew she was there and what would happen if He withdrew to the district of Tyre and Sidon on that particular day.  Jesus was walking through Gentile territory, where it might be reasonable to think that people would not pester Him - since they were not Jews and not looking for the day of the coming of the Messiah.  That would appear to be part of His thinking, although He might have known where this woman was, and sought out her opportunity for her.  In any case, as He is walking, this Canaanite woman comes out to meet Him on His way, crying out after Him about her daughter.

And Jesus ignores her.  Wow.  Is that a familiar feeling?  We pray and pray and hear nothing, and see nothing happening, and wonder if God is going to intervene in our situation on our behalf.

The woman seems undeterred.  She continues to follow Jesus and cry out to Him.  She confesses her faith by calling out to Him as the ‘Son of David', a Messianic title.  She acknowledges Him for who He is, Lord and Savior, the promised One of God.  His disciples, on the other hand only notice that she is continuing her caterwauling and ask Jesus to send her away and give them some peace.  Apparently, this goes on for a while, as Matthew notes that she continues to call out after them, and Matthew says the disciples "kept asking Him" to send her away.

Finally, Jesus speaks to the woman.  He tells her that He "was sent only to the lost sheep of the house of Israel."  These were words of dismissal and rejection.  I have no business with you, is what it meant.  Worse than getting no answer at all, she seems to meet an affirmative rejection.  She doesn't seem to notice that.  What she notices is that He is paying attention, and talking with her, even if it is just to tell her to go away.  She seems encouraged by this and renews her plea, "Lord, help me!"

Then Jesus tells her that it is not right to take the bread from the children and throw it to the dogs.  He tells her that He is not there for her, and that it is not right to take what is meant for the children of Israel and give it to Gentiles like her.  He even ends up calling the woman a "dog".  The woman takes it all in stride.  She doesn't even try to argue.  She takes what Jesus says to her and uses it as part of her prayer - saying that if she is a dog, well, even dogs get to lick up the crumbs that fall from their master's table.  She keeps pushing for her need, asking again for he blessing she seeks.  Nothing turns her aside, not rejection, not insults, not being ignored.  She believes that Jesus is able and ultimately willing to help her, so she continues to pray.

Finally she receives what she asked for.  Jesus speaks admiringly about her faith - "You have great faith, woman!"  We don't know what she knew, or specifically what she believed, but we can see how tenacious it was, how faithfully she believed, and nothing could turn her away!  Responding to her faith, and to her request, Jesus gave her what she wanted, "be it done for you as you wish."  And her daughter was healed at that very moment.

The woman confronted a test of faith, and she passed.  She was clearly not merely a curiosity seeker, or someone who was giving Jesus a try as a last resort, "just in case".  She knew Jesus could help her, and she was confident that He would, even when it seemed otherwise.  So kept praying persistently.

Jesus did not answer her because she bugged Him, or to get her off His back, or even because she was so persistent -He answered her prayer because she trusted in Him to do so.

We also face times when we want or need something, and so we pray.  We should pray like this woman - persistently and believing.  You also know who Jesus is, and what He is like, and what He can do, and what His will is like toward you.  So, you should be able to pray and pray with confidence, and expect an answer, and pray with persistence until you have what you pray for, or clearly see that it is not going to be the way you want it because God knows a better way or a better answer.

You should never doubt the will of God toward you, sinking to the feeling that God doesn't want to bless you.  I often do not know what to pray for because I want something, but I am not certain that having what I want is the best thing for me or anyone else - and I am uncertain as to what the will of God is, so I pray, but I pray that His will be done.  And I pray that prayer until I see the answer.

But there are times in life that we need or want something so strongly that we want to push God's hands, as it were.  In those cases, although we want to pray, "Thy will be done", we have a strong interest in seeing a particular resolution to the situation.  In such cases, we need to be like this woman, asking God for our outcome, and accepting that although it may not work out the way we want it, we will ask until we see the answer, and plead our case before the throne of heaven - because it pleases God when we do.  He is pleased when we trust in Him and in His good will toward us and we boldly come before Him to pray ans plead and seek our relief.  He has commanded that we do so, and promised to hear us and answer us.  The Old Testament says, "Call upon me in the day of trouble, and I will deliver thee, and thou shalt glorify Me."  In the New Testament, Jesus says, "Whatever you ask the Father in My name, believing, He will give it to you."

But be prepared.  You may face a test of faith, too.  God doesn't always answer as quickly as we would like, not does it always come the way we expect.  God will let you hang out there for a while, and the old evil foe will be glad to make you frustrated and depressed about the length of time you plead your cause and hear no answer.  Sometimes God is testing you, to see if you trust Him, or you are just taking a chance that you might get "lucky" and get something out of the prayer.  And, by the way, He already knows the answer, just as Jesus knew the woman would be there, and would jump all of the hurdles because she had such great faith.  Her predicament and her prayers were done, and recorded, for us, and for our learning.

How can you know what the will of God is?  In specific requests, you cannot.  But you know what His will is toward you.  You know His love, and how deeply He is committed to your welfare.  You can see it on the cross.  The pain and the death of Jesus Christ are the testimony to how far God is willing to go for you.  He became one of us to rescue you.  As Paul observes in Romans 8, if He has gone this far, what can you imagine that He will withhold from you now?  "He who did not spare His own Son, but delivered Him up for us all, how will He not also with Him freely give us all things?"

The woman in the account had heard about Jesus, but she had not seen much.  She took the word about Jesus to heart and believed - undoubtedly believing because she had heard the Old Testament promises.  You have heard the Old Testament promises, and have seen the New Testament fulfillment - and you have been baptized and have eaten of the Holy Supper.  How much more you have than the woman had.

God will not perform like a trained animal, nor will He do ‘wish fulfillment' like some mail-order catalog company.  He will always be God.  But you know who that is, and what His will toward you is.  And what is the will of God toward you? Our salvation.

So let us face the test of faith, and meet it with faith.  That means we want to act as though the things we say we believe are true - and that we actually believe them.  We cannot give up, or decide that God doesn't want to be good to us any longer.  Doing either of those things means that you are no longer a Christian.  Whether we are praying, or witnessing, or just living out what we confess, we can be faithful.  The things we confess are true, and we can and we must dare to live as though they are true, if we want to be found faithful.

And trust God as we worship.  Come and eat and drink and be forgiven and strengthened and equipped for life here, and prepared for everlasting life there.  Consider the Canaanite woman, and her test of faith, and face your own challenges as similarly a test of faith.  You can trust God.

Trust in the LORD with all your heart, And do not lean on your own understanding.  In all your ways acknowledge Him, And He will make your paths straight.

In the Name of the Father, and of the Son, and of the Holy Ghost.
(Let the people say Amen)
Posted by Cuda at 11:43 AM