And it came about when the angels had gone away from them into heaven, that the shepherds began saying to one another, "Let us go straight to Bethlehem then, and see this thing that has happened which the Lord has made known to us."  And th 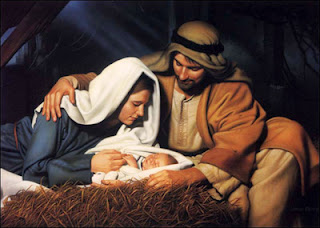 ey came in haste and found their way to Mary and Joseph, and the baby as He lay in the manger.  And when they had seen this, they made known the statement which had been told them about this Child.  And all who heard it wondered at the things which were told them by the shepherds.  But Mary treasured up all these things, pondering them in her heart.
And the shepherds went back, glorifying and praising God for all that they had heard and seen, just as had been told them.

Our text really begins last night, with the angels appearing in the skies over the fields around Bethlehem.  The angel appeared – just one of them – and made the wonderful announcement that a Savior – the Messiah – was born in Bethlehem, and that the sign they should look for is a newborn baby in a stable, lying in a manger.  Then, when this startling vision had spoken, the sky was full of angels - a multitude of the heavenly host praising God and singing Glory to God in the highest, and on earth, peace among men with whom He is well-pleased.  We don't know how long it took, but we do know that the shepherds began terrified and apparently ended up dazzled and excited.

That is where our text this morning starts up.  The angels have gone away into heaven, and now the shepherds respond.  They take the news of a Savior, and the wonder of what they have just witnessed, and they decide that, just maybe, they should go and see for themselves.  Our text says that they went "with haste."  It only seems reasonable.  You have angelic visitors make the announcement of something you have been waiting for all of your lives, and your parents before you, and their parents before them, it just makes sense that you are going to hurry on over to see the thing.

And what did they find?  They found Mary, and Joseph, and a newborn baby lying in a manger all trussed up in swaddling cloths like they used to do with babies back then.  There was nothing remarkable about the scene.  Some of them may have had children born in a stable, sleeping in a feed-trough too.  What was remarkable was that the angels had told them that this One would be there.  They told them who this One was!  He is "Christ, the Lord."  That is like saying "the Messiah, who is God Himself!"

So, how did they respond?  They told everyone.  They told Mary, and they told Joseph, and they told the others who might have been standing around, and they told people they passed on their way back to their flocks.  Once they saw it, and knew that it was just what the angels said, they couldn't keep it to themselves.  They were so excited and happy that they had to tell.   And they returned to their fields and flocks that night praising God and glorifying Him for all that He had done, for all that they had seen, and for Him letting them in on it!

That was one reaction to Christmas:  Evangelism, singing, praises, and sheer delight.

The other reaction was the one Mary had – and possibly those who heard the shepherds.  But Mary treasured up all these things, pondering them in her heart.  This was a quieter response.  It was just as believing, I am sure, but more contemplative.   And all who heard it [this wonderful news from the shepherds] wondered at the things which were told them by the shepherds.  Perhaps this, too, was contemplation.  Perhaps it was unbelief, although we cannot say so.  Maybe they were just amazed.  It was still a quiet response.

Of course, it is really difficult to work up the same sort of amazement and surprise that the shepherds must have felt.  We have no angel choirs, and we know the Christmas story by heart before the Christmas season begins, we have heard it so often.  But the shepherds are like those who come newly to the faith, and really "hear" that wonderful news for the first time.  They can see and feel how big it is.  God has become one of us!  Our sins are forgiven!  We cannot die, but will rise even from our graves and live forever in joy and peace and in the presence of Almighty God!

Adults who come to the faith as adults know the feeling!  It doesn't usually last for more than a couple of weeks or months, but they never forget it.  It is the joy of Christmas, experienced by the shepherds as they heard the angels and then as they raced to the manger and saw that it was all true!  It is something they cannot help but talk about.  It is contagiously embracing.  Those who have encountered new believers have met those shepherds on their way back to their flocks – and they all wonder about what they see and hear as the excited shepherds go about praising God and glorifying Him for all that He has done and made known to them.

People like me, those of us who were baptized as infants and grew up in the faith are more like Mary.  There has never been a time in my life when I did not know of Christ.  I cannot identify a time when I did not believe.  It is an everyday sort of feeling to hear about Christmas.  It is not bad, and it is not excitement.  The thrill of Christmas was about being a child, about presents and candy and family.  I still remember with nostalgic longing sitting around my father's chair as he read once again, each Christmas, the book called "The Littlest Angel."  That is where all the emotion is, for people like me.

But that is not bad either.  It took me a long time to get over the notion that I should be like a shepherd, fresh from seeing the angels and hearing the heavenly choir.  But then this account of Mary reminded me that it is not the same for everyone.  Some of us are shepherds, and some of us treasure up the truths of Christmas, and ponder them in our hearts.  Christmas is not about our feelings and excitement.  If we have them, that is just wonderful!  But if we do not have excitement and that thrill running our spines, that is just fine, too.

Our society seems to need the emotion, the tear-jerkers, the naked excitement.  They have no meaning to the holiday but what they can create.  There is no faith, and the mystery of the Incarnation leaves the unbelieving world cold.  What the nativity scene cannot create, they try to stir up with Rudolph and Frosty and the Grinch.  Those are fun fantasies, and the child in us may enjoy them, but they are not Christmas.  Watch those Hallmark movies, and they will tell you a dozen different meanings for Christmas, "what Christmas is all about," and they will be wrong every time.

Christmas is the truth that God took on human nature and human flesh and blood in Jesus Christ.  That child, who was true Man and yet also God Himself, was born on the day we commemorate as "Christmas".  We remember the overwhelming love that caused our heavenly Father to do such a thing, humble His Son to become just One of us.  The Incarnation of the Son of God – that putting on of flesh – gives true value to human existence.  It is okay to live in this world – even God did it.  The birth of Jesus and His life following gives precious value to family and childhood, and parenting and day-to-day work.  These were all sanctified by God's willing humility.  He did it too, so it must be a good thing!  Daily life and human existence were ratified and made something worth our attention and effort, rejecting all the false sanctity of those who would deny the flesh and reject the life in this world as unholy and unworthy.  God took part in it – so which of us is too good and too pious to invest ourselves in living and in the things of this life which God gives us?  That is part of the thrill of Christmas – a quiet and pondering-sort of thrill, though it may be.

Then, of course, we who don't have the excitement of the shepherds, can also share in their joy that this One, lying in a manger on that first Christmas, was born to save His people from their sins.  He is the Messiah, the Christ.  The shepherds didn't need to be told what a Savior was, or why they needed saving.  Their lives were harsh and painful.  They knew nothing of our conveniences and comforts.  They faced their sinfulness in ways we cannot hardly imagine.  They made the sacrifices of their sheep and lambs to remind them of their sins, and their terrible cost.  They could see the temple from their fields.  They heard regularly about the hope of Israel, and their shame in being a conquered people.  Forgiveness, and freedom, and rescue were important dreams and hopes to them.

We need a Savior no less than they did.  We are just not accustomed to thinking about it, except in church, and some of us find it inconvenient when the pastor makes us face that reality too often or too clearly.  But the baby wrapped in swaddling cloths and lying in a manger was born to be our Savior, and He is.  He lifted sin and death from our shoulders, and bore it to the cross in our place.  He died for what we have done, so that we might live with Him in heavenly glory.  The thought should thrill us and excite us, but, frankly, we have grown accustomed to it, and many times we don't "feel" it much at all.  If you do feel it and get excited, praise the Lord – and enjoy it.

For the rest of us, our reaction to Christmas is like Mary – we treasure these things up and ponder them – believing, and finding the awesomeness of the truth in considering the magnitude of the Love of God, the greatness of the grace of God, the fullness of His forgiveness, and the wonder of the Incarnation and who it was that laid in a manger.

This is Christmas.  Jesus Christ was born to be our Savior, and laid in a manger.  Some of us get all excited and shout about it – and some of us take it all in, treasure it all up, and ponder it in our hearts.  Both are good, and proper, and appropriate.  They are just two responses to Christmas!

In the Name of the Father, and of the Son, and of the Holy Ghost.
(Let the people say Amen)
Posted by Cuda at 1:08 PM