The ONE Important Detail 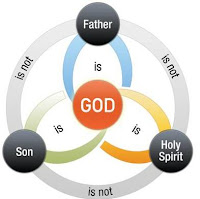 Isaiah 6:1-7
In the year of King Uzziah's death, I saw the Lord sitting on a throne, lofty and exalted, with the train of His robe filling the temple.  Seraphim stood above Him, each having six wings; with two he covered his face, and with two he covered his feet, and with two he flew.  And one called out to another and said, "Holy, Holy, Holy, is the LORD of hosts, The whole earth is full of His glory."  And the foundations of the thresholds trembled at the voice of him who called out, while the temple was filling with smoke.

Then I said, "Woe is me, for I am ruined! Because I am a man of unclean lips, And I live among a people of unclean lips; For my eyes have seen the King, the LORD of hosts."  Then one of the seraphim flew to me, with a burning coal in his hand which he had taken from the altar with tongs.  And he touched my mouth with it and said, "Behold, this has touched your lips; and your iniquity is taken away, and your sin is forgiven."

This is Trinity Sunday.  Today we take time to consider God as He has revealed Himself.   The best explanation of the Trinity is found in the Athanasian Creed.

It is one of the Lutheran Confessions.  It isn't ours alone.  We call it one of the "ecumenical" creeds because every Christian church either uses it or believes and confesses what it says.  If a church body, or even an individual "Christian", so-called, does not share that confession and does not believe what the Athanasian Creed says, that church or that person is not Christian, no matter how much "Jesus-Talk" they use, and no matter what they say.

Our text is the Old Testament Lesson appointed for Trinity Sunday.  In it, Isaiah details a vision of God.  Our theme is The One Important Detail.

One important detail?  Which one?  Isaiah gives us a lot of details.  He tells us when he had the vision, at least to the year.  We have this verbal description of the throne of God, and the train of the robe of God filling the temple.  We have the description of the Seraphim and hear their cry.  Isaiah tells us of the volume and power of their praise to God, and he tells us of the reaction he had to the entire vision.  Which details are significant?

All of them are significant.  Most are symbols.  The train filling the temple, for example, speaks of the glory of God in the temple, and of God's intended purpose for the temple.  The appearance of the angels tells us about the nature of the angels and the glory of God.  Most of the details are symbolic since they deal with invisible creatures, and with God who is only visible when He chooses to be visible.  What Isaiah saw and heard was theology in the form of object lessons.

For example, the cry of "Holy!  Holy!  Holy!' of the angels.  It is called the "Ter Sanctus", the "three holies" literally.  Some people imagine that it is just the way religious talk works, that the angels repeat themselves like that.  But it is more than that.  It is the angelic reflection of the Trinitarian nature of God.  What the New Testament makes so clear, is also reflected in the Old Testament.  The Triune God can be identified in His three persons at the creation in Genesis 1.  The Trinity is reflected in the Aaronic Benediction, with the threefold "May the Lord . . .".  He is here in this song of praise, and His three-in-one-ness is suggested in the account Abraham's Visit by the Lord before the destruction of Sodom.  We can trace the revelation of God's triune nature throughout the Old Testament.

But it is true that we see the Trinity most clearly in the New Testament, at the Baptism of Jesus, for example.  The word, "Trinity" or "Triune", is a Christian invention, of course.  It doesn't appear in the Bible.  It was made up to put a label on the truths which the Bible tells us about God.  First, the Bible tells us that there is only one God.  "There is no God but one", Paul shouts in 1 Corinthians 8:4.  The fundamental confession of Israel is Deuteronomy 6:4, "Hear, O Israel! The LORD is our God, the LORD is one!"  That is the "one" part of three in one.

The three part comes from the places where the Bible calls the Father God and others where they call the Son, God.  And still, others which speak of the Holy Spirit as God.  Jesus says, "I and the Father are one."  Then there is the Baptism scene, where the Father opens the heavens and speaks, the Son is standing on the shore of the Jordan, and the Holy Spirit is descending visibly to land on and rest on Jesus in the form of a dove.  That is the "three" part.

We put them together in the light of the Scriptures and we end up with the Trinity.  The rest of the details you have confessed this morning, as you spoke the words of the Athanasian Creed, have been hammered out the hard way, by theological debate, and by correcting false teachers, and by demonstrating over centuries that if you say the wrong thing here about God, the Gospel falls apart, or, if you explain God's nature without certain difficult truths, the God you end up describing is not the One in the Bible, and He fails the test of being able to save us as the Bible says He has.

That's the real issue here.  The Trinity is fundamental to the Gospel.  You can talk about forgiveness and resurrection and stuff without accepting the Trinity, but it is rather like those museum displays that look so realistic from a distance, but if you get up close, all the little imperfections make them look so terribly phony.  If you don't have the Trinity, you lose several things essential to the Gospel and how the divine economy works.  The entire issue is really about the Gospel.

And that brings us back to the one important detail.  What is the one important detail in the Old Testament Lesson?  It is part in which forgiveness of sins is pictured for us.  Isaiah cries out, "Woe is me, for I am ruined! Because I am a man of unclean lips, And I live among a people of unclean lips; For my eyes have seen the King, the LORD of hosts."  He confronts the holiness of God and is utterly dismayed by his own sinfulness!  If we were to face God, we would be humbled and crushed by our sins as well.  No man can see God and live, or so God tells Moses when Moses says that he wants to see God's glory.  His glory is consuming, and yet we live.  And Isaiah was being consumed by His guilt by merely seeing the vision, and not God as He is.

And this one picture depicts for us the Trinity.  We have the altar of the Father, the sacrifice of the Son, and the angel - literally the "messenger" who conveys the forgiveness of sins from the altar to us.  That would be the Holy Ghost, the One who sanctifies us or makes us holy.  He brings us the same good news each week.  You hear it in the absolution.  You hear it in the proclamation of the Gospel in the sermons.  And you receive it by mouth, just as Isaiah did, only you receive it in the Blessed Sacrament.  Here in this holy meal, you receive the evidence and the fruit of the sacrifice of the very Son of God for you.  You receive it as the gift is pressed to your mouth, and your sins are forgiven, and your guilt is cleansed away, and you are enabled to stand before the living God without terror or danger.

The vision of Isaiah is inspiring!  It inspired Martin Luther to write the hymn, "Isaiah, Mighty Seer, in Days of Old."  It brings to our minds a sense of the majesty of God and the wonder of heaven.  But the one important detail is the one that speaks of our forgiveness!

In the Name of the Father, and of the Son, and of the Holy Ghost.
(Let the people say Amen)
Posted by Cuda at 6:58 PM