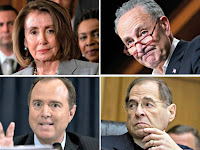 Who gives the various state governments the right to betray their charter?  The government was instituted by the people to maintain order and keep the public safe.  Where do the officials serving in the government derive the authority to use their office for personal and political gain and to put the public at risk by releasing violent felons into the general population?

The various offices of government were established for order, not to approve the use of the streets as a public toilet, or to erase our borers for their own short-sighted political gain, or to attempt to rob the populace of its God-given
rights.

We the people need to find and establish a peaceful method of bringing those who fail in their duties or use their offices to oppress the people to justice - swiftly.

It might be nice to find a way to bring balance and honestly back to the press -- perhaps by limiting the freedom of the press to print, physical and or electronic, and exclude from 1st Amendment protections the video media.
Posted by Cuda at 8:23 AM